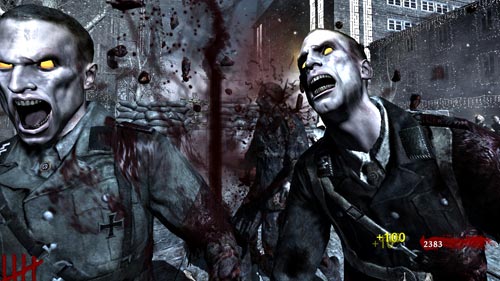 Activision has now officially announced the existence of the Call of Duty: Black Ops "Zombie Mode", a.k.a the worst kept secret ever. You'll be able to enjoy the zombie apocalypse in up to four-player co-op gameplay, but nothing else is known at the moment.

We should have more details soon since GameTrailers TV (GTTV) will be airing a special Call of Duty: Black Ops episode on 15th of October.

Call of Duty(R): Black Ops Co-Op to Include Zombies
The Call of Duty Community's Favorite Un-Dead Make Their Return in The Year's Most-Anticipated Entertainment Launch

Treyarch revealed today that the community-favorite "Zombies" is coming to Call of Duty(R): Black Ops which hits stores worldwide on November 9th, by Activision Publishing, Inc. Zombies were originally introduced in Call of Duty(R): World at War and became an instant hit. Call of Duty: Black Ops fans can combat the living dead in up to four-player co-op gameplay.

"Zombies have been such a hit with our community that we were committed to bringing brand new experiences to Call of Duty: Black Ops," says Treyarch Studio Head, Mark Lamia. "We've taken extra special care to retain the essential ingredients of our new game mode, and have also crafted a nice surprise for the fans."

Today's news follows the announcement that four updated co-op maps from Call of Duty: World at War will be made available as part of the Call of Duty(R): Black Ops Prestige and Hardened Editions (Xbox 360, PS3), along with the premium edition Steelbook(TM) Case, custom Black Ops limited edition medal and an exclusive Black Ops Avatar outfit.