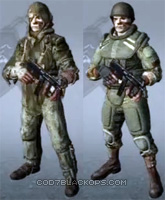 Call of Duty: Black Ops multiplayer perks give you a variety of different enhancements, thus allowing you to customize your classes even further. There are a total of 15 perks and they are divided into 3 slots, so up to 3 perks can be equipped. When you reach level 4, the whole perk list is unlocked and becomes available for purchase with CoD Points (Xbox 360, PlayStation 3 and PC).

Slot 1 will define what your multiplayer character looks like. For example, Ghost gives you a ghillie suit, but Flak Jacket adds extra armor. See the picture on the right.

Ability: Allows you to move faster, but how fast depends on the equipped weapons mobility. This should be used with a "run and gun" class due to the added speed.

Ability: Replenishes your ammunition and lethal grenades when you walk over blue scavenger bags that are dropped by dead players. This won't resupply launchers or equipment. Scavenger is very useful with weapons that run out of ammo quickly.

Ability: Ghost works pretty much like Cold Blooded from Modern Warfare 2. You are undetectable by the Spy Plane killstreak when you have this equipped. You show up on the radar if you fire a weapon that doesn't have a silencer.

Pro Ability: Undetectable by aircraft, infrared and sentries. Enemies won't see your name or a red crosshair when targeting you.

Ability: Flak Jacket greatly reduces explosive damage and allows you to survive any indirect explosive attack. The Flak Jacket is back in black ops 3 multiplayer perks, but doesn't feature a pro version, like all the Black Ops 3 perks. Explosive crossbow bolts are lethal if they get stuck on you and explode.

Pro Ability: Deflects fire damage and allows you to reset the fuse of a thrown grenade when you pick it up.

Ability: Reduces the amount of kills required for any killstreak by one. For example, the Care Package normally requires 5 kills, but if you have Hardline equipped you only need 4 kills.

Pro Ability: Allows you to randomly choose another reward from a Care Package. When you open a Care Package, you can either take the reward or try again for something better.

For example, when selecting a Care Package and you get the Spy Plane killstreak reward, you get the following option: "Hold X for Spy Plane OR Double Tap to Try Again" (Xbox 360)

Ability: Increases your weapons bullet penetration, but it doesn't increase bullet damage. This is pretty much like Deep Impact from Call of Duty 4 and FMJ weapon attachment from Modern Warfare 2.

Pro Ability: Your weapons do extra damage to aircraft and turrets. This also reduces flinch when you are shot by someone.

Ability: Enables you to hold your breath longer when steadying a weapons scope. Scout offers a significant advantage to sniper class weapons.

Pro Ability: Allows you to switch your weapon faster.

Pro Ability: When equipped, this enables you to aim faster after sprinting and recover faster from a knife lunge.

Ability: Gives a faster reload time by reducing your weapons reload time in half. This is extremely useful with weapons that have long reload times, like shotguns and light machine guns.

Pro Ability: Allows you to aim down the sight ~50% faster than normal. This doesn't work with weapons that have scopes.

Ability: This is the equivalent of Bling from Modern Warfare 2. Warlord allows you to put 2 attachments to your primary weapon. Stealth classes should use this since they can equip a silencer to remaining undetected and still reap the benefits of having a second attachment.

Pro Ability: You start with one extra lethal and tactical grenade, except smoke (WILLY PETE).

Ability: Protects you against NOVA GAS.

Pro Ability: Tactical Mask Pro reduces the effects of flashbangs and concussion grenades, it also reveals the position of a flashed or stunned enemy.

Ability: This extends your sprint time, but it doesn't increase your speed.

Ability: Ninja allows you to walk, sprint and jump almost silently, therefore you can sneak behind enemies more easily. This is the equivalent of Dead Silence from Call of Duty 4, MW3, and Advanced Warfare.

Pro Ability: When you have this equipped enemies will be louder, it also makes you completely silent.

Ability: Gives you the ability to survive a normal death by dropping you to the ground. You can use your pistol to defend yourself from enemies. Second Chance ends after 10 seconds or if you take a single hit from the enemy, and in both cases, you will die. This perk won't be featured in MW3.

Pro Ability: If you have Second Chance Pro equipped you can survive a little longer than normal. Teammates can also revive you - even players that don't have Second Chance. You can see a white REVIVE tag above a player that can be revived.

Ability: Allows you to see enemy explosives, equipment and Tactical Insertions. This highlights them with a red color like SitRep from Modern Warfare 2 and BO2.

Pro Ability: This is one of the most interesting additions to the whole Black Ops perks list. Hacker Pro actually allows you to sabotage enemy Care Packages and also turn enemy equipment friendly. This also makes you invisible to Motion Sensors.