Multiple Black Ops gameplay videos have leaked on the internet. This doesn't come as a surprise, since the internal beta is being played by thousands of players. Three different maps have been shown: "Cracked", "Launch" and "Summit", the maps themselves aren't new, but the gameplay is. All the videos seem to be played on the Xbox 360 via Xbox LIVE

The L96A1 sniper rifle seems a bit overpowered at the moment, since it's a one-hit kill whether you shoot someone in the chest or the arm. The gun stats aren't final, so we can expect this to change before the game ships. Many of the players on the videos are already pretty high leveled, so they have been playing the internal beta for a while now.

You can select the area that the Attack Helicopter killstreak is deployed to. This couldn't be done in the previous Call of Duty games.

On the "Launch" map the huge missile in the center of the map actually takes off (randomly?), causing the map to shake, which makes aiming a lot harder. Two of the Marathon Pro perk unlock challenges can be spotted on the "Cracked" map video; Marathon: First Blood and Marathon: 26 Miles. Sleight of Hand Pro also has one unlock challenge called Sleight of Hand: ADS Kills.

Activision keeps removing these videos as fast as they are added to Youtube and the likes, so unfortunately they can't be added to the website at the moment. 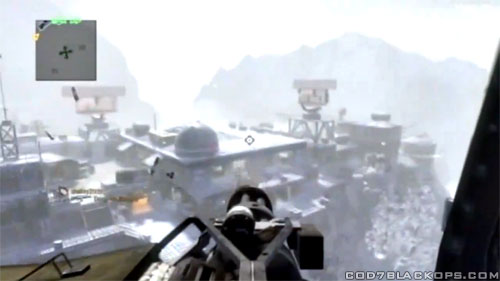